Chris Martin inducts Peter Gabriel into the Hall of Fame

HomeChris Martin inducts Peter Gabriel into the Hall of Fame 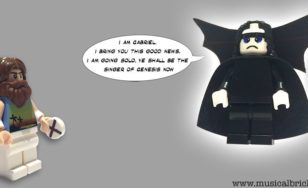 I’d like to read to you from the Book of Genesis.

It came to pass at that time, that an angel of the lord descended and appeared before Phil the Collins, and Phil the Collins said unto to him, ‘Who are you, O angel?
And the angel replied, ‘I am Gabriel. I bring you this good news. I am going solo. Ye shall be the singer of Genesis now’

Here is the full transcription of Peter Gabriel’s warm and moving speech:

“Chris has been working as a stand-up comic…Well, thank you so much for those kind words. It means a great deal that you’re doing this. Thank you. He’s a great songwriter.
I also wanted to acknowledge a much-appreciated, many-times nominated, but not-yet inducted musician that I had up onstage with me, Leo Nocentelli from the Meters. So I saved up all my pocket money to buy my first beaten-up old tom-tom — I think it was about £7, it cost me. And to hold this thing in my hands was the key to another world, and I had no idea then that it might lead me here. I never actually made it as a drummer. I was full of enthusiasm, but not a whole lot of talent. But I snuck in here anyway.
So I’m saying to all those people now at the start of that journey, that if you’re exploring making music and looking at us old-timers getting our decorations, I say two things: Dream big and let your imagination guide you, even if you end up dressing up as a flower or a sexually transmitted disease. They may think it’s a little strange. They may laugh at you, but just do it.
Secondly, surround yourself with brilliance — the brilliance of who you love being around and the brilliance of their talent. I’ve worked with so many amazing people through these years, and you can see from the musicians I have on the stage with me, I’m surrounded by great — and have always been — by great musicians, including some of the world’s greatest drummers which, as an aspiring drummer, has been a real thrill.
But particularly from the beginning of my solo work, a man who sadly couldn’t be here tonight but has been deputized by the legendary Pino Palladino, but Tony Levin. I wanted to mention. David Rhodes, who’s been with me in the album process for so long, too, on guitar. You’ve got the amazing Manu Katche and David Sancious here tonight…and we have a wonderful vocalist, Jennie Abrahamson, who’s been touring with me.
I also have had had the great fortune to work with extraordinary engineers and producers, because they can make you sound good, and they give you a good up-the-backside when you need it, and make sure they squeeze as much juice out of you as you can get. I’ve got an extraordinary, dedicated and loyal group of people who represent me and have worked with me for many years in the management team: agents and record company folk and all the many talented folk that it takes to put a tour together. We have had for years and years and extraordinary crew who will do anything to get our show up and running, and whatever it takes. So, to all those people, I definitely wouldn’t be here without all of you working hard, and I really appreciate it.
But, in the end, the core of what you are and where you are is where your heart is, and those who you love and those who love you. So I want to thank especially my dad for teaching me about the power of ideas, imagination and science; my mum, who taught me about music and compassion; my amazing kids, two of whom are here tonight — the other two are in the business of having a baby, it’s grandchildren for me — but they inspire me to make me very proud. And now I have two grandchildren, and most of all, the person who has to suffer most for the life that I’ve chosen, my incredible wife, Meabh, who’s given me an extraordinary life. I love you so much. Watch out for music. It should come with a health warning. It can be dangerous. It can make you feel so alive, so connected to the people around you, and connected to what you really are inside. And it can make you think that the world should, and could, be a much better place. And just occasionally, it can make you very, very happy. Thank you so much. It means a great deal. Thank you.”