Here we have created some classic and iconic keyboards and synthesizers. The Minimoog is an analog synthesizer first manufactured by Moog Music between 1970 and 1981. Kraftwerk started an electronic music revolution with their fourth album Autobahn using the Minimoog. The bassline on Michael Jackson’s world-beating ‘Thriller’ was made from two modified Minimoogs playing in unison. Keith Emerson played one on Emerson, Lake and Palmer’s acclaimed Tarkus. Rick Wakeman of Yes also has a few! 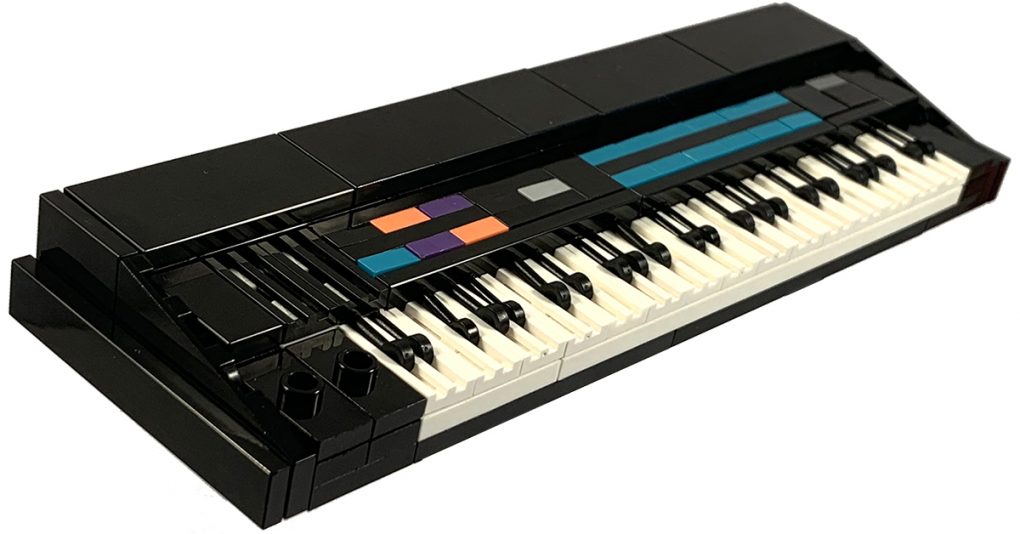 The Yamaha DX7(1983) uses a groundbreaking digital technology known as FM (Frequency Modulation) Synthesis, it became the first successful digital synth, and its distinctive sound can be heard prominently on tracks like Kenny Loggins’ “Danger Zone” and a-ha’s “Take On Me”.

Tony plays the organ sound in the Abacab verses on the DX-7 in this clip. There are various quick shots after the 8:40 mark. This is from one of the Wembly shows during the “Invisible Touch” tour, 1987. A polyphonic synthesizer that was as easy to manipulate. Sequential Circuits’ Prophet-5 quickly became an industry standard. From Tears For Fears’ ‘Everybody Wants To Rule The World’ and Talking Heads’ ‘Burning Down the House’  through to No Doubt’s ‘Just A Girl’ and Radiohead’s ‘Everything In Its Right Place’, the Prophet 5 pops up everywhere throughout contemporary music, and almost certainly exists among the greatest synthesisers of all time. Used throughout the 1980’s and on into the 90’s by names like Tangerine dream, The Orb, The Who, the Pet Shop Boys, Vangelis, Genesis, the Human League, and filmmaker/composer John Carpenter. There is only one name you need to know, and that is Andy Grobengieser. His designs can be seen here. On Broadway, Andy Grobengieser has served as keyboard musician and associate conductor for shows like LESTAT, THE LITTLE MERMAID and GHOST. He is also quite an accomplished Lego artist. There is a lego ideas support page with all these models. Please cast your vote: Moog 55 Modular Synthesizer Launched in 1979, the Fairlight CMI was the first commercially viable digital sampling keyboard. It ushered in a new decade of musical experimentation at the hands of artists like Peter Gabriel, Kate Bush, Mike Oldfield and the Art of Noise.